Asian Games 2018 was a very successful milestone for Indonesia, as a nation and as a host. Donning the subject of “Energy of Asia,” it triumphantly captured the emotion and the strength of a unified Asia. Words won’t describe enough on how beautifully everything went from the planning into execution.

Indonesia Asian Games 2018 Organizing Committee or, better known as INASGOC, had no hesitation in appointing Nayati as the designated kitchen equipment management vendor, with high expectation to prominently manages and optimizes the storage, cooking and serving area foodservice equipment of Asian Games as well as the Asian Paralympic Games later on October.

The kitchen and the dining hall is situated in a massive tent outside of Wisma Atlet, Jakarta. The challenge was unprecedented, as everything had to be installed in a brief period and will serve as a non-permanent structure, so clearance for dismantling after the event is an equally essential consideration as well. Having the modularity design of Nayati equipment was a huge advantage in giving unified looks of the equipment set-ups while shortening the installation time.

Electric-powered appliances are extensively used enabling clean and aesthetic installation unfettered from cables and drainage point as everything is centralized and covered. Fryers, steamers, combi oven, braising and boiling-pan, to name a few, are heavily used to cover daily 20 hours of non-stop service for three weeks.

Check out our video for exclusive coverage in both the kitchen and the dining hall used by the champions of Asian Games 2018 from 45 nations! 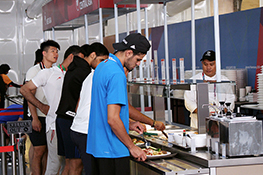 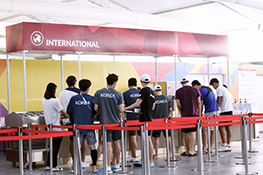 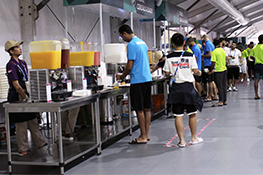