HOST MILAN 2017: THANKS FOR YOUR SUPPORT

This year, Nayati have been fortunate enough to participate in the Host Milan, the biggest foodservice and hospitality show in the world. The show itself invited 24% more professional visitors than the previous counterpart in 2015 and exhibiting 13% more foreign exhibitors around the world, quite an impressive trend-setting achievement for the industry.

Host Milan 2017 was a great success for Nayati. Presenting the latest state of the art western and oriental ranges such as Mobile Teppanyaki cart, Automatic Tilting Boiling and Braising Pan with touchscreen operating system,  Premix Steamer, High Powered Wok and, especially, the all-new Meritus 750 lines in gas and electric setup.

The all-new 750 Meritus is a total re-engineering of the preceding version, designed with the focus of usability, cleanability, and serviceability. The design is simplified for usability and cleanability but with vital internal intricate details that prolong the lifetime of the primary components. This is done without reducing the versatility of original Meritus 750. The lineup will be officially launched in March 2018, complete for electric and gas. “The showcasing of all-new Meritus gives a boost of confidence to both partners and customers in delivering the first-class experience of horizontal cooking,” says Aldo, the Head of Business Development in Nayati. H2 cabinet, stabilus door, new knob design, intelligent connection system and embossed front panel are among the standard features of New Meritus.

Thanks to all our partner who supported Nayati in the “capital of professional hospitality”, overall, the participation of Host Milan 2017 brought a positive trend of prospect and contacts both in quality and quantity compared to 2015’s and Nayati remains enthusiastic to partake further in the 41st edition of Host Milan in 2019. 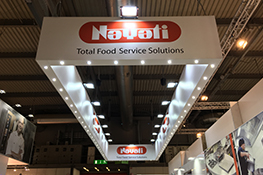 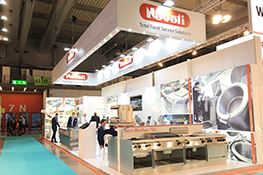 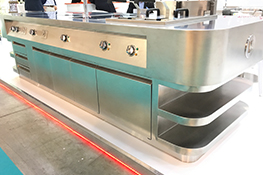